I won’t attempt to classify cameras as these are dependent on the basis.  Here are some examples:

See what I mean?  Rather than make things difficult, I’ll just present several camera designs (past and present).

Camera Obscura
This is the forerunner of the camera as we know it today.  The camera obscura (or pinhole camera) was invented by Alhazen (Ibn Al-Haytham), a great authority on optics in the Middle Ages who lived around 1000AD, and was able to explain why the images were upside down.  The name camera obscura is derived from two (2) Latin words: camera (“vaulted chamber/room”) and obscura (“dark”), essentially “darkened chamber“–which is what the camera is.  The camera obscura consisted of a closed box (or room) with a small hole on one end.  The light from the scene outside enters the hole strikes a surface inside where it is reproduced upside-down (including color and perscpective).

In the 18th century, a mirror was added to a box version to project the image right-side up, along with a glass top section with tracing paper used as a view screen (see image above, right).  Reducing the opening to a certain diameter increased the sharpness but made the image darker.  Reducing the opening too much the sharpness worsens due to diffraction. Remember our previous discussion about light moving as a wave.  If you constrict the opening too much, it results in destructive interference.  Consequently, an opening with just the right diameter results in constructive interference thereby enhancing the image.  Some camera obscura made use of lens instead of a pinhole to expand the aperture (we’ll discuss this later).

The earliest cameras produced in significant numbers used sensitised glass plates and are now termed plate cameras.  The glass plate was coated with light-sensitive material (usually silver halide).  This was the forerunner of the photo negatives used since the beginning of the 20th century, and was in use until the 1970s.

The view/plate camera consisted of a lens system (lens and iris diaphragm) mounted to a lens pane, light-proof extensible bellows (like an accordion), a plate/view pane, all mounted on a brace.  This assembly is normally mounted on a tripod.  Attached to the plate pane is a dark cloth.  The photographer removes the lens cap, then goes to the rear of the camera.  He goes under the black cloth to compose the image: turning the lens clockwise or counter-clockwise to focus the image, he adjusts the distance of the lens pane to the plate pane by sliding the lens pane backward or forward along the base, to frame the image.  When he is satisfied with the focus and composition, he returns the lens cap, he then inserts the glass plate negative into a slot at the plate pane.  The glass plate has a sheet of black material that protects the light-sensitive emulsion from being accidentally exposed.  The photographer removes the protective covering from the plate, then removes the lens cap thereby exposing the glass plate to record the image.  After the necessary time has elapsed, the lens cap is replaced on the lens to end the exposure.  The protective cover is re-inserted into the plate to protect the exposed negative from over exposure, and allows the glass plate to be removed for processing in a dark room.

Large Format Cameras
The large format camera is a modern incarnation of the early plate cameras and remain in use for high quality photography:  astrophography, architectural and industrial photography. There are three common types: the monorail camera, the field camera and the press camera. All use large format sheets of film, although there are backs for medium format 120-film available for most systems, and have an extensible bellows with the lens and shutter mounted on a lens plate at the front. These cameras have a wide range of movements allowing precise control of focus and perspective.  Movement allow for tilting, vertical and lateral movement of the lens pane.  Although almost all are film-based, Mamiya has a digital model with a 4×5-inch sensor with 22MP (megapixels).

Medium Format
Medium-format cameras have a film size somewhere in between the large format cameras and the smaller 35mm cameras. Typically these systems use 120- or 220-film. The most common sizes being 6×4.5 cm, 6×6 cm and 6×7 cm. The designs of this kind of camera show greater variation than their larger brethren, ranging from monorail systems through the classic Hasselblad model with separate backs, to smaller rangefinder cameras. There are even compact amateur cameras available in this format. 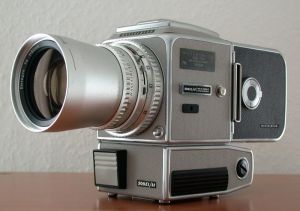 The Hasselblad used in the US Space Program. The body is machine-tooled from a single block of aluminum.

Due to the better image quality of medium sized camera over the popular 35mm film camera, its smaller size over the large format camera, and flexibility offered by interchangeable lens, motor drives, film cassettes, etc. the medium format camera, particularly Hasselblad, is used in the space program.

Rangefinder Cameras
The range finder has two separated viewfinder windows, one of which is linked to the focusing mechanisms and moved right or left as the focusing ring is turned. The two separate images are brought together on a ground glass viewing screen. When vertical lines in the object being photographed meet exactly in the combined image, the object is in focus. 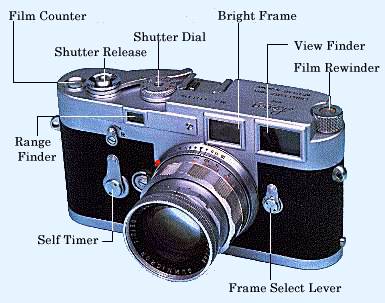 Parts of a typical tangefinder camera

The image below depicts the generic design of a rangefinder camera:

The disadvantage with the rangefinder is that since it isn’t on the same plane as the lens, it suffers from parallax error.  Parallax error occurs because the lens of the camera and the viewfinder see the subject from a slightly different position. Over a long distance the error is hard to detect; but over short distances, such as when photographing portraits or macros, the difference in the perspective becomes magnified and can enormously affect the composition of a photo. This is why many digital cameras compensate by turning on the LCD screen when the macro function is used. The screen shows the image the sensor is receiving and avoids the parallax error.

In the single-lens reflex camera the photographer sees the scene through the camera lens. This avoids the problem of parallax. Single-lens reflex cameras have been made in several formats including 220/120 taking 8, 12 or 16 photographs on a 120 roll and twice that number of a 220 film. However the most common format of SLRs has been 35 mm and subsequently the migration to digital SLRs, using almost identical sized bodies and sometimes using the same lens systems.

Almost all SLR used a front surfaced mirror in the optical path to direct the light from the lens via a viewing screen and pentaprism to the eyepiece. At the time of exposure the mirror flipped up out of the light path before the shutter opened. Some early cameras experimented other methods of providing through the lens viewing including the use of a semi transparent pellicle.

Twin-lens reflex
Twin-lens reflex cameras used a pair of nearly identical lenses, one to form the image and one as a viewfinder. The lenses were arranged with the viewing lens immediately above the taking lens. The viewing lens projects an image onto a viewing screen which can be seen from above. Some manufacturers such as Mamiya also provided a reflex head to attach to the viewing screen to allow the camera to be held to the eye when in use. The advantage of a TLR was that it could be easily focussed using the viewing screen and that under most circumstances the view seen in the viewing screen was identical to that recorded on film. At close distances however, parallax errors were encountered and some cameras also included an indicator to show what part of the composition would be excluded.

How the TLR works

Some TLR had interchangeable lenses but as these had to be paired lenses they were relatively heavy and did not provide the range of focal lengths that the SLR could support. Although most TLRs used 120 or 220 film some used 127 film.

1 thought on “Photography Lesson: The Camera”