The camera body is the main part of the camera. Basically, it contains the metering system, the viewfinder system, the shutter, the shutter controls, the shutter release button, and in most models, the built-in flash.  In film-based cameras, it has the film receptacle, the film spool, film advance lever, film release, and the ISO/ASA indicator switch. In digital cameras, it houses the electronics and exposure controls, the removable memory card interface, battery, image viewer, interface ports, and the electronic sensor.  Except for the SLRs and Medium-format cameras, the lens and aperture is permanently affixed to the body.

Regardless of the design, the body has one overriding requirement: it has to be light-proof.  A small seepage will ruin an otherwise perfect picture.   In the case of underwater cameras, an obvious additional requirement is that it should be waterproof as well.  Some camera models are built as reusable waterproof cameras.  Most models would require an external waterproof shell to encase the regular (non-waterproof) body (and lens) to make it operate underwater.

We’ve already discussed the viewfinder systems in most of the camera designs so we won’t be discussing that in this section.  The following items discussed will familiarize you with the different controls found on the camera body.  Where applicable, we will distinguish which are found in manual film-based cameras and those found in digital cameras.  Indepth discussion about using the various controls will be found in succeeding lessons.

A shutter is a device that allows light to pass for a determined period of time, either exposing photographic film or a light-sensitive electronic sensor to light to capture a permanent image of a scene.   In the early days of photography, the shutter was found in the front of the lens.  In modern cameras, the shutter is either just behind the lens, or just in front of the film or electronic light sensor (for digital cameras).

There are two basic types of camera shutter:  mechanical shutters and electronic shutter.

Electronic shutters can turn each pixel on/off simulating the shutter speed.  This is more expensive  and is available on CMOS (Complementary Metal Oxide Semiconductor) sensors only.  CCD (Charge Coupled Diode) sensors still require a mechanical shutter to block off the light while the image is shifted out from the sensor to internal memory (jsut like a bucket brigade).

There are two basic types of mechanical shutters: the focal-plane shutters, and the leaf shutters.  Each are discussed separately.

Below, you’ll see each one in action.

Now that you’re familiar with how camera shutters operate, there’s just a couple more things you need to learn: 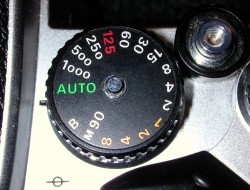 An AUTO setting lets the camera decide based on the ISO (ASA for film-based) setting, aperture, and lighting conditions.

The B setting, or Bulb mode, will open the shutter as long as the photographer presses down on the shutter release button.  This can be useful in astrophotography (taking pictures of stars, planets, etc.).  However, you need to have the camera on a tripod, and using a cable release or remote control.

We’ll discuss the effect of shutter speed in taking pictures in the next lesson.

This control is found only in film-based cameras. Digital cameras have a similar control: it’s called the ISO setting.  Film speed control allows you to calibrate your camera’s meter to your film speed so that you will get an accurate exposure reading.  The film speed may be set electronically through a menu or via a knob/button on manual cameras. On film-based cameras, it is critical to set the proper value based on the ASA/ISO rating of the film loaded.  Not doing so will affect the exposure of images captured.

We will discuss the effect of film sensitivity (ASA) or sensor sensitivity (ISO) in one of the succeeding lessons.

The cameras metering system is in the screen that you see through the viewfinder when composing a shot. It will measure the light settings of the scene.  In manual cameras, they provide a guide for you to set the ASA/ISO, shutter speed, white balance, and aperture so that you can expose the image correctly. In AUTO mode it sets the cameras shutter/aperture accordingly.

There are three basic metering modes:

The preceding picture shows a sample of an in-camera meter (left, digital display).  Different camera models have different representations. My very old Pentax K-1000 is a totally manual film-based camera (see image above, right).  The light meter is a stick (similar to a car’s fuel gauge) you can see on the right side of the screen (see figure above, right) –all you had to do was select the aperture and shutter speed to keep the needle in the center.  We will discuss metering in detail in one of the succeeding lessons. 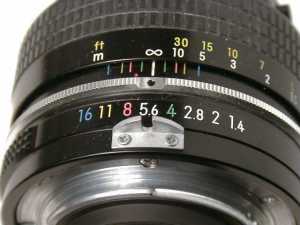 The aperture functions like the iris nad pupil of the eye.  Depth-of-field is essentially how deep of the objects in the pictures are in focus (will be discussed in a succeeding lesson).

The hot shoe mount is a point on the top of most SLR cameras where an external flash can be connected. It is called a “hot shoe” because it has electrical contact points and guide rails that fit over the bottom of the flash like a shoe.

On cameras that allow interchangeable lenses, there is a metal ring on the front of the camera where the lens will attach. This ring contains electrical contact points to connect the lens controls to the camera body. There is a small button or lever to the side of this mount called the “lens release button” that releases the lens from the body.  To attach the lens, you need to align the orange dot on the lens to the corresponding one on the lens mount.

There are two (2) basic lens mount: screw-threaded type, and bayonet type.  The screw type, as the name implies, the inside edge has grooves, and the lens have the corresponding thread pitch.  To simplify things, the mechanism is like a nut and bolt.  The lens mount is the nut (with the grooves), and the lens is the bolt (with the threads).  The bayonet type, also known as friction-lock type, features tabs on the inner edge of the lens mount (see figure on the left), that match the tabs on the edges on the tail-end of the lens.  Different camera brands have different dimensions for the bayonet type lens mount making lens incompatible.

Note that interchangeable lens don’t fit all camera brands.  3rd party lens manufacturers (e.g. Tamron, Tokina, Sigma, etc.) manufacture lens specific to a lens mount type. If intend to buy additional lens for your SLR/DSLR, make sure that the lens matches your camera’s brand and model.  For example, I bought a 28-200mm Tokina lens for my old Pentax K-1000 15 years ago.  Before I decided to buy a DSLR, I wanted my old lens to work on the new DSLR body. It’s great because my old Tokina works well with my new Pentax K-x DSLR (except for Auto-Focus)–I’m perfectly comfortable with using manual focus anyway. I won’t discuss the different exposure settings found in digital cameras in this section, those deserve their own sections.