The aperture is essentially the hole through which light (from the object) travels before registering on the film or image sensor.  In cameras, the aperture is adjustable (i.e., the diameter can be varied).  The aperture value usually ranges from f/2 to f/22.   The lower the number, the larger the opening.  So, in the previous statement, f/2 is the widest, while f/22 is the narrowest.  You may be wondering about the f/ notation?  This is called the f-number (sometimes called the focal ratio, f-ratio, f-stop, or relative aperture).  I won’t go into the technical stuff about this here.  All you need to remember anyway is that the smaller the f-stop, the wider the opening; and, the larger the f-stop, the narrower is the opening.  This means that in bright light, use the narrower opening (i.e. larger f-stop); and, inversely, in low light, use the wider opening (i.e. smaller f-stop).  (On the illustration below, you can see the relationship between the f-stop and the diameter.) 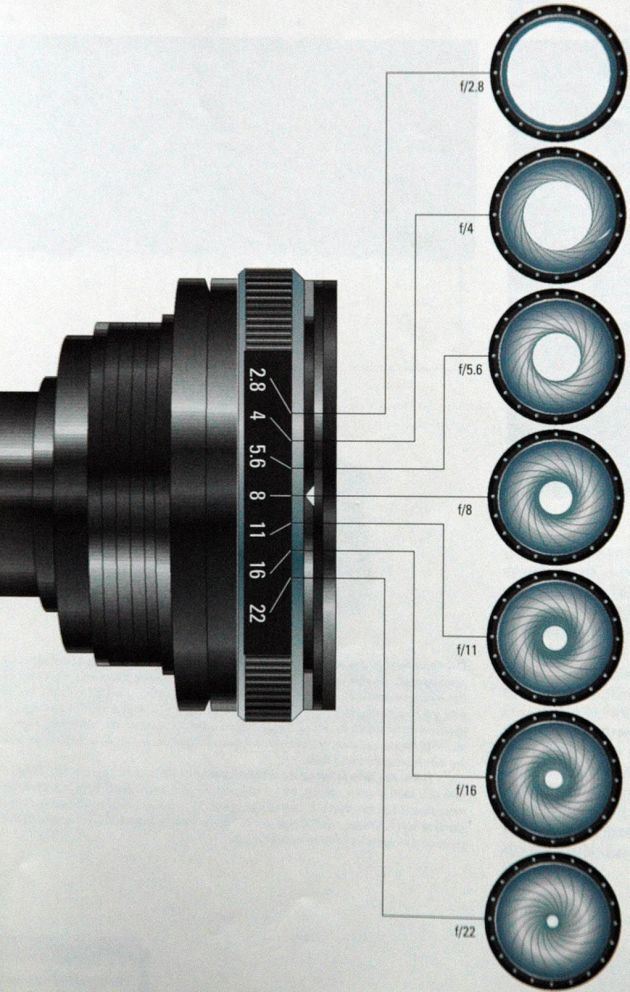 As we’ve mentioned in the camera body section, the aperture controls are found on the aperture ring of the lens.  This is found in older, manual lens.  Lenses made for digital cameras don’t have an aperture ring; the contols are on the panel. 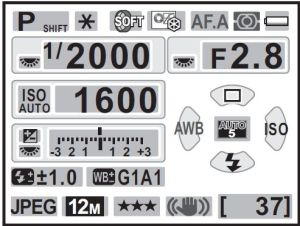 Above is the LCD panel of a Pentax K-x.  The Aperture is the one near the upper right corner (wtih the F2.8).  On the Pentax K-x, like most digital SLRs, you can change the aperture in Manual shooting mode or Aperture Priority mode.

The aperture has two effects, and each one captures the same image differently.

If you look at the pictures of the moon above, you’ll notice that the shutter speed is constant at 1/6 of a second in all shots. Notice also that the image gets progressively brighter as the aperture increases (i.e. the F/value decreases).  Remember that the aperture controls the amount of light entering the lens and registering on film or image sensor.  This is the first effect of aperture–it controls the amount of light.

Depth of field is a great way to take a picture of a subject and allow just a selected portion to be in focus and blur the rest.   The next two samples are examples.  The subject is an action figure from the Lord of the Rings–the Witch King of Angmar.  In the first shot, I put emphasis on the Witch King himself and softened the weapons.  In the next shot, I put emphasis on that over-sized, hideously wicked-looking mace-on-chain weapon he wields.

In the example below, I wanted to frame a white statue of Pieta (at the Mountain of Salvation in Batangas) between to White Lilies.  The statue was around 15 feet away.  To bring both the foreground (White Lilies) and background (Pieta statue), you need to use a high f/stop (at least f/22).  For this shot, I used f/27 to achieve it. 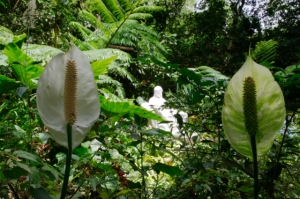 Foreground and Background in focus

In the next example, I took a shot of a plaque containing a beautiful prayer with the same Pieta statue in the background.  I want the words to be readable and the features of the statue in focus.  The statue was about 3 meters from the plaque. I composed my shot in Aperture Priority Mode and set the f-number to f/22 (ISO 800, as it was a cloudy day). 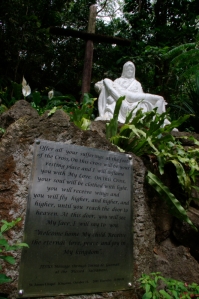 So, increasing the aperture value (or F-value, F-stop), increases the depth of field.   This is a useful thing to remember when photographing a group of people seated along the long sides of a table, with the photographer at one end of the table (unless of course the photographer wanted to blur some people in the photo on purpose).

2 thoughts on “Photography Lesson: The Aperture”